RIYADH AND ASMARA, AND THE CHESS PIECES MOVER

RIYADH AND ASMARA, AND THE CHESS PIECES MOVER 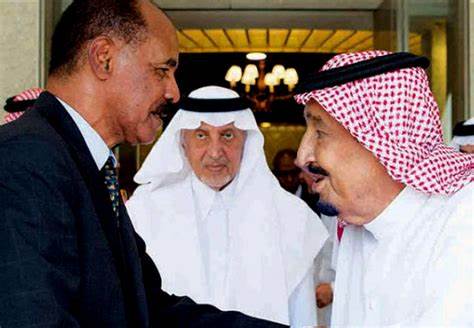 Eritrea’s relations with the Gulf States are almost the least dynamic among its counterparts in the Horn of Africa, and if it weren’t for the “Storm of Resolve”, Asmara could have hardly been mentioned in the Gulf foreign policy files. One might ask about the reasons, which I believe are many, including the composition of the Eritrean State, which has over time lost the elements of the real state and has transformed into a geographical spot suitable only for hire. The allies of the Eritrean regime are quite aware that Asmara will inevitably witness political change for Eritrea has been left behind.

Recently, the media and the press in East Africa reported the visit of a high-level Saudi delegation to the Eritrean capital Asmara. Afterwards, I received dozens of emails from the scientific research circle, demanding an explanation of that visit which the African elites had described as tense. Despite my objection to that description, I agree that Asmara will exert no effort to support Riyadh and its allies except after the approval of the mover of chess pieces in the Horn of Africa, namely, Israel.

For decades, Tel Aviv has been playing a central role in the Horn of Africa. We are not about to talk of the history of Israel’s relations with the Horn of Africa countries, but a single example is enough to explain Israel’s strategic thinking with regard to managing the situation in that region. Relations between Addis Ababa and Tel Aviv were severed on the background of cooperation between Gamal Abdel Nasser and Emperor Haile Selassie at the Organization of African Unity. In addition, Addis Ababa disengaged its alliance with the West to join the socialist camp, but later, it turned out that the whole matter was coordinated with the US and Tel Aviv. The Ethiopian-Israeli relations were never interrupted to the extent that the Mossad agents were keen to thwart the Eritrean revolution for fear that the country could lose its Christian identity and turn into an Arab state overlooking the Red Sea. Politicians in Tel Aviv used to comment that “It’s better to have a Pro-Soviet Ethiopia controlling Eritrea than a Pro-Western one with no such control”. At some point, Tel Aviv found that its interests in Ethiopia are in line with those of the Soviet Union.

On the other hand, Eritrea’s strategic location forced Washington to hold on to Ethiopia despite its socialist orientation, which explains the US refusal to supply Somalia with offensive weapons during the Ogaden War. This in turn explains Tel Aviv’s success in reformulating coalitions that enabled it to strengthen ties with Ethiopia during the presidency of Meles Zenawi, and support the Eritrean revolution -which it was against- represented by the Popular Front headed by the current Eritrean President Isaias Afwerki.

Implications of the Saudi delegation’s visit to Asmara
Firstly: I think that the visit of the Saudi military delegation to Eritrea did not mean to ask Asmara for real support in southern Arabia as much as it is a Saudi reconsideration of events in the Horn of Africa. In so doing, Riyadh seeks reassurance when political attitudes change in the Horn of Africa, despite my full conviction that changing attitudes is an aspect of international relations. Riyadh is quite aware that the goals it seeks in Asmara are achievable only as per the Israeli-American agreement. Here, neither Asmara nor Riyadh and its allies have the ability to put an end to the war in south Arabia.

Secondly: The international powers are unwilling that the Arab Coalition in southern Arabia achieve a real victory. Such a victory in Yemen will motivate the Coalition to repeat the same in other countries and will strengthen the domestic front of the Kingdom and its allies. In addition, it’s a direct message that strong parties, capable of confronting Iran have now emerged, a matter that the international powers would not allow to happen. These powers are involved in not putting an end to the battles in Yemen and benefit from sales of weapons to the Arab Coalition. Moreover, they are keen to convey the bad image of the Coalition’s operations in Yemen circulated today in the global media and exploited for more pressure and extortion from time to time regarding the human rights issue in Gulf countries and in Yemen. The international powers link these two files in a way that is commensurate with their international interest.

Thirdly: The Yemen Crisis was intended to be resolved only through political channels since the start of the Saudi-led “Storm of Resolve” in 2015. This embarrassed the Coalition countries before their peoples and the world public opinion. The whole matter could have been avoided had it not been for international promises that the battle in southern Arabia would be short, effective and successful.

It seems that the Gulf States are about to declare normalization with Tel Aviv. This has been preceded by an exchange of shuttle visits by officials from both sides covered by the media. Though, I believe Tel Aviv is considering further steps in order to support the Gulf orientation in the Horn of Africa. The Gulf concessions have not yet begun, even though, it’s likely that Israel won’t reach a compromise with the Arabs for the sake of their own interests as much as for the sake of enhancing its future strategic vision towards the Gulf States.

The international powers recognize that the Afro-Gulf relations are linked to them; therefore they cannot be excluded when it comes to real Gulf interests in Africa. The Gulf States can unite to deal with this situation via a ten-year strategy in which each country undertakes a certain role so that they can review their attitude towards Africa. However, this is hampered by political disagreements among the Gulf States which must be resolved immediately with no return to disputes that only harm the future of the Gulf peoples.