SOMALIA, BETWEEN A US RETURN AND GULF DISSONANCE

SOMALIA, BETWEEN A US RETURN AND GULF DISSONANCE 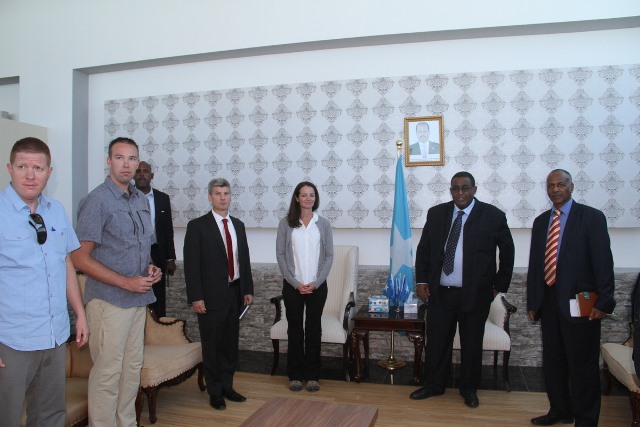 The Horn of Africa has witnessed important events that have fueled the Gulf competition for that region, reaching unprecedented levels among Gulf States. This competition has evolved into an existential one, plaguing the Gulf people and tearing apart their unity.
After the outbreak of the Gulf Crisis in 2017, the Horn of Africa countries became divided between several axes and adopted different attitudes towards those axes. In spite of the neutral position of Mogadishu and Addis Ababa, Somalia had to bear the consequences of such neutrality given that it’s the weakest link or so deemed. Somalia is a State exhausted by internal accumulated issues since 1991 which have been exacerbated by a keen regional neighborhood that such issues should continue as per their strategic interest. Kenya seems to be the most uncompromising party in dealing with the Somali issue. What currently complicates the Somali-Kenyan issue and promises further complication in the long term is the recent dispute over the maritime borders with its oil resources. This dispute will be resolved at the International Court of Justice, but when and how?
Washington’s recent announcement of reopening its embassy in Mogadishu after three decades might answer our question. Such an event marks regional and international balance. What’s happening today in the Horn of Africa does not require Washington to continue its usual proxy role, for there are some parties that must be directly tackled, such as China.
In my opinion, Washington had not actually left Somalia and the reopening of its embassy in Mogadishu after decades is only an acceleration of the coming process of handling the issue of the Kenyan-Somali maritime border on the one hand, and tightening control over the new Sudan on the other via assigning roles in line with its strategic vision.
Washington understands that the maritime border rich with oil fields and disputed between Nairobi and Mogadishu is an inherent right of Somalia and the International Tribunal’s decision, however late, will be in favor of Mogadishu. But Washington is persuaded by Nairobi’s provocation and procrastination for Mogadishu in this file because it leaves the door open for a US initiative to resolve the dispute.
On the other hand, Nairobi is confident about Washington’s support but that doesn’t mean the latter will deny the right of Mogadishu. It’s likely that Washington will make a deal with both sides, that Somalia may take part of its right in return for settlement of some issues and support for the government of President Mohamed Farmajo in order to internally empower him, especially that Washington hopes Somalia will feel satisfiedin the medium term at least or otherwise Somalia will no longer support the Eritrean-Ethiopian reconciliation. Consequently, Washington will save substantial loss that might exceed the one suffered in Somalia during the 1990’s, which the US media avoids mentioning, let alone the risk to repeat it. Washington is unwilling to see a destabilized Somalia, being its gateway to the African oil which is superior to Gulf oil. Moreover, Washington cannot lose the Eritrean-Ethiopian reconciliation issue it began designing decades ago, along with the re-shaping of the New Sudan which is nearing normalization if it hopes to develop and progress.
Concerning the Gulf States, I believe the current Kenyan-Somali dispute will be affected by the policy of the conflicting Gulf axes and will be further complicated in the short and medium term. That dispute will be ignited by political parties and their representatives who found outlet in the Gulf resources. The Gulf States will divide between Nairobi and Mogadishu and Somalia’s recourse to the International Court of Justice over the disputed maritime border with Kenya will definitely be in its favor, but it won’t prevent continual unrest and skirmishes backed by Gulf resources at and around that border zone. The whole scenario is dependent on the goals set forth by Washington in the first phase of its official return to Somalia.
What supports our vision is the international powers’ eagerness that the state of discord among Gulf States should continue, so that they are able to isolate each State and exploit such dissonance according to their interests. This is especially true if we remember that certain issues in the Horn of Africa are managed by the international powers on behalf of Gulf States, something that the former wish to remain hidden before the world public opinion. If such a secret has been disclosed, another party is always there to bear responsibility, a thing that further compromises Gulf interests. Divergent political views among Gulf States besides the future role each State intends to assume apart from the rest will exacerbate the conflict, which has begun to take place in a number of African capitals. That means that the Gulf conflict is not limited to the Horn of Africa and will spread to the entire African continent. This in turn will practically contribute to the collapse of the Gulf Union proposal, especially that it’s not possible for Gulf States to converge views, at least in the short or medium term.
Afro Gulf Relations
OCT,2019